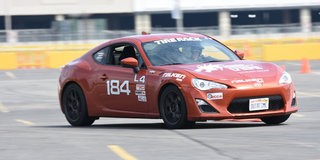 For the second Tire Rack ProSolo® in a row, participants were greeted Saturday morning with rain at the 2019 Tire Rack New Jersey ProSolo. The weather did clear as the day went on, allowing all drivers to earn dry times on Saturday afternoon. Unfortunately, the rains returned overnight leaving the sealed asphalt lot at New Meadowlands wet with standing water in many areas. This put an end to competition with the safety of participants as the highest priority.

On Saturday morning, Super Street R looked to be a battle of who could put together a clean run. Sam Strano was the guy to beat after the morning, but in the afternoon, Grant Reeve jumped to the lead with his two runs to take the lead, 0.375 second ahead of Strano. With two red lights to finish the afternoon, Reeve had to stand on that effort, but it was enough to claim the win. Matthew Braun and Devin Taylor claimed the third and fourth place trophies respectively.

As Saturday morning went on, many groups got saw dry or drying conditions for their first runs on the course. The drying conditions in Street 4 allowed some drivers to come up to speed faster. Second drivers in the class saw the greatest advantage. Joshua Thal-Pruzan capitalized with the early lead, followed by Michael Yanase, both second drivers. In the afternoon, Yanase stretched out his lead, while some of the first drivers were able to make up ground. Danny Kao joined his codriver at the top of the leaderboard in second while Ido Waksman slotted into third. Thal-Pruzan settled into fourth, just 0.121 second behind Waksman. Aaron Buckley, Tim Lombardi, Alan Eisenreich and Bruce Lukens completed the trophies in the 28-car class.

The 21-driver Street Touring Sport class was part of the first group that had dry conditions for all of their runs. Todd Kunze was the early leader, followed by Kevin Donovan. Kunze did improve in the afternoon, but coned away his last two and fastest runs, opening the door for Rich DiMarco charging in his Mazda Miata. DiMarco won by 0.961 second over Kunze, with Donovan in third. Lenworth Woolcock, Michael Roleira and Mike Kibialka claimed the fourth through sixth place trophies respectively.

The arrival of Teslas in autocross has created a stir this season. Their acceleration speed makes the electric cars especially well-suited for ProSolo competition. In B Street, Matthew Rusty English was untouchable in the rain in a Tesla Model 3, but against the old racing adage, dry was the great equalizer. Mark Daddio made up over nine seconds in the dry but fell to English by 0.303 second. Christopher Laprus was only another 0.101 second behind Daddio in third, with Donour Sizemore claiming the fourth and final trophy position.

With the Sunday cancellation, year-end Challenge points were awarded based on Challenge qualifying. Darren DiSimo won C Street by a commanding 1.674-second margin to take the top qualifier honors and Super Challenge win. Matt Waldbaum was awarded the runner-up honors on the merits of a 1.530-second margin of victory in E Street. Billy Davis completed the podium in third from Street 2.

In the Ladies classes, the nine drivers bumped into Ladies 3 for a singular index class. The rain presented an advantage for Gwen Habenicht in the Audi TT, but dry conditions in the afternoon allowed the two-wheel-drive vehicles to find their footing. Jennifer Bedell jumped to the lead in her SSC-prepped Scion FR-S with co-driver Chris Peterson just behind. A cone and red light hindered Peterson’s progress as Bedell took the L3 win, top qualifier, and Ladies Challenge win by 0.079 second over her codriver. Ally Arts earned her first Tire Rack National Solo trophy in third with Habenicht falling just out of the trophies in fourth.

Complete results from the 2019 Tire Rack New Jersey ProSolo can be found here.