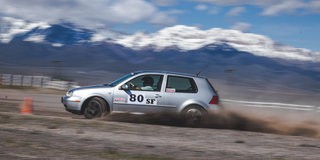 Round One of the DirtFish SCCA RallyCross© National Tour is complete and if it’s any indication of what the remainder of the series will be like, participants are going to be in for a real treat! The weather leading up to the event was wet and gloomy, but the rain let up just in time for a beautiful weekend of competition. The planned area for the track was still too wet to use, so they moved Saturday’s course to an alternate location. The course was tight and technical, requiring a fair bit of patience to navigate with accuracy. Participants go 10 runs on Saturday over two courses. By Sunday, the original location had dried out enough to use for a higher speed course that that rewarded power and aggressive use of throttle.

In Stock Front, Keith Lightfoot established a lead right on first runs and continued to lay down fast times throughout the event until run five on Sunday where he DNFed due to a dislodged clutch cable. He was able to get it fixed and make run six clinching a second-place finish.  Will Geyer took the win by just over five seconds with Chris McMillan finishing third out of nine entrants, 1.820 seconds behind Lightfoot.

Despite only having two entrants, Stock Rear had one of the best battles of the weekend with Brendan Schweitzer and Joshua Fowler battling it out.  Schweitzer was a little slower out of the gate, six seconds behind after first runs. As the weekend progressed, he became more confident and caught Fowler, taking over the lead on fifth runs. The battle that ensued was close and heated as the drivers swapped the lead back and forth. The final swap happened on their very last runs with Schweitzer taking the class win by a mere 0.416 second.

Stock All was also a class of two with Nathan Schreiter taking home the class win in his Audi A3. While Bill Martin was the only competitor in Prepared Front, he still laid down some impressive times in his Ford Fiesta ST.

Prepared Rear had seven drivers with close battling for the top three spots. At the end of sixteen runs, Gonzalo San Miguel took the first-place trophy. He was closely followed by Evan Markewycz in second and Robi Pardey in third, with just 2.580 seconds separating the trio after 16 runs.

James Veatch III set an early fast pace in Prepared All and claimed the win in a convincing manner with a 7.542-second margin of victory over James Israelsen. In the class of seven, Joe Lavelle claimed the third and final trophy in third. Brandon Hurst brought out a Tesla P90D that showed that electric vehicles have potential in RallyCross competition. Hurst’s raw times were on par with the class, but cones kept him from being in contention for a trophy.

Modified Front may have only had three competitors, but Jason Lang and reigning MF National Champion, Bret Hunter, had a tight competition all weekend. By Sunday afternoon, the difference was 5.684 seconds with Lang taking home the win. Hunter’s five cone penalties, to Lang’s two, ended up being the difference that cost him the win.

In Modified Rear, reigning MR National Champion, Brianne Corn, walked away with a convincing win by almost 15 seconds in the class of two.

The largest class of the weekend, with ten competitors, was with Modified All. Close racing is expected in a class of this size and the MA competitors didn’t disappoint in their quest for the four available trophies. Todd Briley emerged on top, only hitting one cone all weekend, with a margin of victory of 5.859 seconds. Austin Dowda claimed the second-place honors, just 2.198 second ahead of Brock Palmer in third. Ron Binkley claimed the fourth and final trophy after making the long haul from Duvall, Washington for this event.

Complete results from the 2019 DirtFish SCCA RallyCross National Challenge in Tooele, Utah can be found here.

The 2019 DirtFish SCCA RallyCross National Tour continues next weekend, June 14-16, in Chillicothe, OH for The Great Lakes Challenge. More information about this event and the complete tour can be found here.