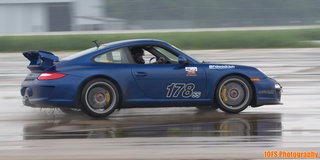 The 2019 Tire Rack ProSolo® Season has been abnormally damp, but this past weekend’s Toledo ProSolo took that standard to a new level. Near constant rain meant that no class had completely dry conditions. Drying conditions during Shift C’s morning runs gave second drivers had an advantage in those classes, but the rain returned with a vengeance during Shift D, giving first drivers the advantage. The rest of the weekend got increasingly wet from there. Improvements were few and far between as a few drivers cleaned up from dirty runs.

In Ladies Class 1, Jojo Corrales-Kean took the Saturday morning lead in the ESP-prepped Infinity G35, but Charina Jones, in the FP-prepped Pontiac Solstice improved by 1.713 seconds to take over the class lead in the afternoon. Sunday morning conditions were even wetter for the ladies and no improvements were made, giving Jones her first ProSolo win.

Tara Johns took advantage of the best conditions of the weekend on Saturday morning in Ladies Class 2 to take a more than 2-second lead. Despite some improvements by her competitors in the afternoon, Johns held onto the win and was top qualifier for the Ladies Challenge with a 1.442-second margin of victory. She faced L3 winner Julie Heaton in the final round of the Ladies Challenge, with Johns taking that win by over 2 seconds. Johns says she hadn’t won a Ladies Challenge since 2013.

For many, Father’s Day weekend is spent competing. For the Junior Kart dads, they spent most of ‘their weekend’ supporting their kids. In Formula Junior A, Katie Bangs led over brother Matt after Saturday, but Matt was able to clean up a side to pass his sister on Sunday, in the worst conditions of the weekend. In Formula Junior B, Hudson Heaton had his fastest runs of the weekend on Sunday morning to take the class win.

Justin Peachey took his CAM-S Chevrolet Corvette to the top of the PAX rankings with his matching, to the hundredth, first pair of runs Saturday morning in the dry. It was all Corvettes in the CAM trophies as Steve Waters and Eric Peachey took the next two spots on the podium. Eric Brown and Mike Losert claimed the fourth and fifth place trophies respectively.

Sometimes oddball weather conditions can lead to some luck for unlikely competitors. Jay Bullington capitalized on dry conditions on Saturday morning in his Audi S4 to take the lead in Street 1. As the skies opened up on second drivers, the competition was effectively over. Bullington took the win by 0.645 second over John Vitamvas before mounting up some comically small all-season tires for the Super Challenge, tucked into the spacious fenders that are normally home to steamroller Hoosiers. Randall Wilcox and Daniel Stainback claimed the third and fourth place trophies respectively, both sitting on dirty runs from Saturday morning.

Street 4 was one of the tightest classes of the weekend, with three drivers earning positions in the Super Challenge, based on interval from the lead. While the conditions were undoubtably the best on Saturday morning, all trophy winners in this class took all of their runs throughout the weekend. Lance Keeley laid down the times to aim for, leading Matt Luckow by 0.802. Riley Heaton claimed the third podium spot, just 0.036 second behind Luckow. Richard Verret was the only trophy winner to find time later in the weekend, taking his fastest runs on Sunday morning to slot him into fourth. Aaron Buckley and Alan Eisenreich claimed the fifth and sixth trophies respectively.

The Super Challenge was an interesting mix of drivers with dry and wet dial-ins. When those conditions matched, the competition was close to even. When they didn’t, margins of victory were measured with multiple seconds. Brian Conners had won Super Street by 0.478 second over Chris Dressler, but his dial-in was set in very similar conditions to the Super Challenge. Despite facing a competitor with a dry dial-in and benefiting from a red light, Conners’ path to the Super Challenge Top Eliminator round was a challenge. There, he faced Bill Rogerson from B Street. After the first round, Rogerson led by 0.751 second. The margin after they switched sides was less than 0.1, with Conners taking the win. When he parked the car, he didn’t understand why the grid bracket was being handed to him and had to be told that he’d won. Kristo Kukk, from A Street, won the Bonus Challenge and a free ProSolo entry for a future event.

Complete results from the 2019 Tire Rack Toledo ProSolo can be found here.

The 2019 Tire Rack ProSolo Season continues in two weeks in Topeka, KS. Learn more about that event and the entire ProSolo schedule here.