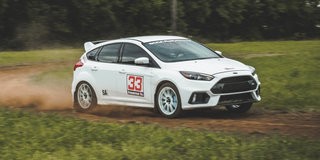 It was a sunny Friday afternoon in June as competitors started rolling into Chillicothe, Ohio for the 2019 DirtFish SCCA RayllyCross® Great Lakes Challenge. Friday was reserved for setup, tech inspections, course walks and a welcome party thrown by the Ohio Valley and Western Ohio Regions of SCCA.

Saturday morning met competitors with overcast skies and the occasional raindrop. The grass-covered course started off slick but became grippier as the grass wore away, revealing the tacky mud underneath. The weather threatened occasionally, but only presented with slight sprinkles throughout the five morning runs. The weather continued to hold out during the afternoon runs until the fourth run started and so did a downpour. The course got slick fast and final runs slowed down with mud slinging and cars sliding all over the course. The downpour continued and as the final class started, lightning was throw lightning into the mix, ending competition for the day. Only three drivers were left without their final runs.

The rain continued as competitors showed up to the venue Sunday morning.  As much as organizers wanted to run on Sunday, it was just too wet to continue safely and the decision was made to cancel Sunday’s competition.  The driver’s meeting was turned in to the awards ceremony.

Stock All drew eight competitors and while Josh Armantrout laid down some quick times in a 2016 Ford Focus RS to stretch out a lead as the day went on, Don Carl drew the attention in a rental Audi. Carl and Trever Taylor had a great battle going all day for second place. in the end, Carl took home the second-place trophy with a 1.261-second lead over Taylor and his Mitsubishi Lancer Evolution in third place.

In Prepared All, Orion W. Fairman commanded the class from first runs and built upon his lead from there to take the win by 25.355 seconds in his Subaru STI. Christian Retterer was the best of the rest in his Mitsubishi Eclipse GSX to claim the second-place trophy, 26.803 seconds ahead of the next competitor in the class of five.

Jason Fuller laid down some consistently quick times throughout the day in his Subaru Impreza WRX in Modified All, giving him the quickest single lap as well as the lowest overall combined time in the event. The result was a 11.114-second margin of victory over second-place finisher, ZB Lorenc in a Subaru Impreza. Justin Abide wheeled his Honda Civic Wagon to the third step on the podium, just 4.073 seconds behind Lorenc.

After Don Carl’s Dodge Neon couldn’t make the trip to Ohio, Stock Front became a faceoff between Chang Ho Kim in his Acura Integra and Warren Elliott in his Mini Cooper S. Early in the day, Kim had the obvious advantage, extending his lead by over a second with each run. As the day wore on, Elliott started laying down some faster times, but it was too little too late as Kim took the class win by 9.053 seconds.

In Prepared Front, ten competitors meant that four would walk away with trophies. A battle emerged quickly between Harold Denham and John Seaton in a Mini Cooper S and Ford Fiesta ST respectively. It was still a close contest, with Seaton staying within striking distance until the last run in the rain when he got held up a bit and tagged a cone, sealing his fate in second place, 11.874 seconds behind Denham. Alex Ashbaugh claimed the third trophy spot in his Dodge Neon SXT, 7.130 seconds back while Dan Hutchinson was on a charge, until a rerun on his last run meant that he ran in slimier conditions, putting him 6.308 seconds back in the fourth and final trophy spot in a Ford Escort GT.

Modified Front was the largest class of the event with 14 competitors. Because of lightning, three competitors were not able to make their final runs on Saturday, so the final run for all other drivers in the class were thrown out. Andy Thomas ran away with the first-place trophy in his Toyota Celica. Matt Wolfe led the rest of the pack, 15.907 seconds back in his Ford Escort GT. Willaim Ehrman finished just 2.807 seconds back in third in a Dodge Neon GLH, Jason Lang another 1.970 seconds behind in a Honda Civic Si in fourth and Greg Mercier rounded out the trophies in fifth, 0.046 seconds back in his Volkswagen Rabbit GTI.

In the seven-driver Stock Rear class, co-drivers Ryan Miles and Dan Shea dominated in the Porsche Boxter. Miles took the win, 7.551 seconds ahead of his co-driver. John Voegeli claimed the third and final trophy in a Mazda MX-5, 13.809 seconds behind Shea.

Prepared Rear was a small but mighty class of one as Katie Orgler stayed in the class while her co-driver Shawn Roberts moved up to Modified Rear, the second-largest class of the weekend with some of the closest racing and twelve drivers.  John England and Vaughn Micciche set the early pace with Roberts and Brianne Corn taking a couple runs to find comfort on the surface. The result was less than eight seconds separating the four trophy winners at the end of the day. England took the win by 4.141 seconds over Micciche. Roberts was another 1.369 seconds behind with Corn claiming the final trophy 2.220 seconds back in fourth. All were in Mazda Miatas except for Micciche in a Porsche 924 S.

The final stop of the 2019 DirtFish SCCA RallyCross National Tour takes place July 20-21st at Lucas Oil Speedway in Wheatland, Missouri. More information about that event and the SCCA RallyCross program can be found here.