In Your Own Words: Vincent Melon 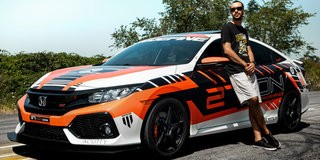 Vincent Melon attended the Tire Rack Time Trials National Tour Presented by Hagerty in Portland. Vincent didn’t grow up in a car family, he wasn’t gifted a route to motorsports – he found his way, starting with working on cars at national chains and growing into his own performance shop. We caught up with Vincent after the first competition event he’d ever run and here’s what he had to say:

I’ll be straight up… I’m a product of The Fast and The Furious.

That film came out in 2001 when I was nine years old. I saw that movie and left the theaters hooked. That was it, man. I was import tuners from there on out. Skylines, RX-7s, Civics, the whole lot. I was a kid so basically I was into cars and anything that had to do with cars. Video games, hot wheels, plastic models, you name it and I was about it.

I started working with cars officially when I was 16. I got my first job at a car wash and progressed from there. I worked at an AutoZone for a while, and then a Bridgestone for a bit. When I took my next big leap, I started working at a race shop. It was an import sport compact performance shop, so Subaru STIs, Supras, Integras, all of the real popular Super Street import cars. It was there I learned to build race engines, tunes chassis, rebuild transmissions and everything from the inside out. I did that for about 3.5 years. After a while of building some crazy machines, things sort of flat lined and I looked for the next big opportunity. At the ripe age of 22 I sold everything I had and made the 2000-plus mile trek from Kansas to Washington State to work at CorkSport Mazda Performance (a shop dedicated to late model Mazdas). I spent the next 3 years learning the in and outs of business and design before I made the biggest leap of my life.

When the new generation of Hondas came out, I noticed a big hole in the market. I quickly took everything I knew, partnered with a team of really dedicated individuals and started a business specifically for the new 2016+ Honda market. These new Hondas were ready for a fresh new start and we were going to give it to them. It was the first time all of the Civics were factory turbocharged in various trims, the first time the Type R came to the USA, and Honda made the full switch to gasoline direct injection. No one else in the Honda game was really going into that and we knew we could REDEFINE it. Seeing as how the new Civics are so good out of the box the timing was perfect to create a business and reinvigorate the aftermarket brand again. So that’s what I did with 27WON Performance, a brand new performance brand dedicated to the 2016+ and newer Hondas. While we lean toward the street side of things, we focus solely on performance parts that are fully capable of going on a race or road-going Honda or Acura. Even parts that are great for a Time Attack style of car.

When I started 27WON (editor’s note: pronounced two-seven-won), I had just turned 25. A lot of my friends in the industry thought SCCA Road Racing was for the old dudes, whereas Time Attack was much more popular with guys my age. Most of those cars are all super crazy tuners and the cars we grew up with. From big wings, to crazy aero these cars where laden with stickers on the side that my friends could relate to. I’m young and my crowd is young so we vibe on the same level. My customers generally all fall between the mid 20s and late 30s. So the reason I was so excited with the intro of Time Trials was twofold. First is to push my parts to the limit. When my team develops a performance part we don’t only want to show that it’s great for the street, but that it can compete and win in racing. Wherever you fall in the spectrum – from just wanting to have fun, or wanting to get more competitive, our parts are tried and true. I use Time Trials as my platform to showcase just what our products can do.

My second goal is to get more young people to race. Prior to the Portland Time Trials event, I had done about eight or so HPDE events around the country. The Portland event was technically my first competition event with legit scoring and prizes. My personal goal is that I want to use SCCA Time Trials to work up to a Pro License for Time Attack. I want to develop myself as a driver and my car to build up to that Global Time Attack style level. I don’t expect my customers to go full tilt like I want to, but I want to show that they can if they so desire and this is a great way of doing so. I want to show people how easy it is. That you can just get in your car, build it to as far as you want, and go compete.

Mostly, I just want young people to stop thinking SCCA is for old people and to get out and have fun with cars.