Libecco Wins by a Nose in Formula Enterprises Finale 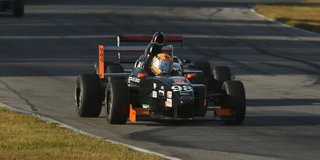 Ray Mason, of Blacklick, Ohio, finished in a distant third to complete the podium.

“I’m elated and a little bit heartbroken at the same time knowing how it all came down in the end, but I couldn’t have predicted a better finish to our season,” Libecco said. “It was really good, clean racing and that’s what it’s come down to all season. Being able to race side-by-side with Mark, two inches apart from each other, on the ragged edge of braking, and come out clean every time, there’s not a lot of racers out there that will do that. This is an up-and-comer who has it.”

Starting from row two in fourth, Libecco, in the No. 98 Allied Dermatology Alliance Autosport SCCA FE Mazda, used a drafting move to slingshot to the outside of turn one, taking the early lead from polesitter Snyder. Snyder paid back the favor in lap two to reclaim the lead.

Following a four-lap shootout after an extended caution period, Snyder lost his nose cap, mirrors, wing and all the surrounding fiberglass after making incidental contact on the last lap with frontrunner Charles Russell Turner on the Oak Tree Curve. The incident sent Snyder airborne and Turner spinning, forcing Turner to retire the race after taking the lead on the restart.

As Snyder nursed a damaged front end, Libecco chased down the defending champion, sliding to the inside of Snyder’s No. 1 Snyder Brother’s Racing car. Racing through Hog Pen down the front straight with wheels nearly touching the pair crossed the finish line simultaneously, but it was Libecco’s fully intact nose that crossed the stripe first. Snyder finished second, but was later penalized one position.

“I was in the air, then I wasn’t but my car had nothing left on the front,” explained Snyder. “I knew since I didn’t have a nose that I needed to brake early. I went through Hog Pen completely sideways, and there was James right beside me. We were racing down to the finish line and I guess James pulled a Lightning McQueen on me, sticking his tongue out for the win. It was a great race and James has been a great competitor all season. James just gets really good starts. I’ll be working on that in the off season for sure.”

Falling to the back of the field on the start, Mason, in the No. 2 Alliance Autosport car, kept digging, making up lost ground lap after lap. Bunched up with several cars on the restart, Mason maintained his composure throughout the 15-lap finale, rounding out the podium in third. But with Snyder's penalty later, Mason officially finished second in the race.

“I kept pushing, trying not to make mistakes, and here we are,” said Mason. “We caught that FE2 traffic after the yellow, that was a bit problematic because I had to go wide off course to miss cars. It all worked out in the end.”

Live, online video coverage of Runoffs races, presented by Mazda, is available throughout the three days of competition at SCCA.com/live. An audio race call, supplied by the Super Tour Radio presented by Hoosier Racing Tire broadcast team, is also available at www.SCCA.com/live, as well as live timing and scoring for each National Championship race.

Photo: James Libecco leading the way to an FE win at the Runoffs