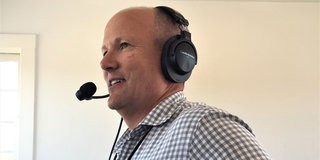 McKeel Hagerty, CEO of Hagerty - the world’s leading provider of insurance, valuation and experiences to the enthusiast car hobby - served as Grand Marshal for the 2019 Sports Car Club of America® National Championship Runoffs® at Virginia International Raceway (VIR). It was the first time McKeel attended the Runoffs and had a chance to work on the Starter’s Stand, flag a corner, ride in the pace car, and get a behind the scenes glimpse at how SCCA members come together to pull off such an immense event.

“I’ve never been to VIR before, so that in and of itself makes it a special day,” McKeel said during an interview at the National Championship. “But to be here at the Runoffs, it’s super special for me. It’s kind of been a dream for a long time.”

During McKeel’s 10-minute chat with Runoffs pitlane reporter Heyward Wagner, the duo discussed everything from the future of the automobile hobby, the release of Hagerty’s Never Stop Driving book, the Hagerty Driver’s Club, and even the company’s partnership with Sports Car Club of America®.

Check out the full interview with Runoffs Grand Marshal McKeel Hagerty below.