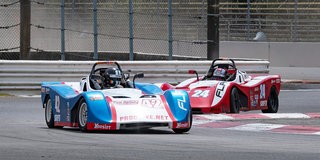 PORTLAND, Ore. (May 18, 2019) – To be truthful, the weather in Northwest Oregon has been pretty wet as of late. So it’s no surprise that those competing in this weekend’s Hoosier Racing Tire SCCA® Super Tour at Portland International Raceway, an event hosted by SCCA’s Oregon Region, thought the 1.97-mile, 12-turn circuit would be damp at times. But that wasn’t the case for nearly all seven of Saturday’s race groups.

The day opened with Spec Racer Ford Gen3 taking the track under dry conditions. Todd Harris was on pole with his son, Calvin, starting second, followed by fierce competitors such as John Black, Mike Miserendino and Steve Fogg. After going three-wide at the start, Todd moved to the front. But for the next 15 laps, it was anyone’s race.

Fogg and Black looked strongest as the race neared its conclusion. But with just under five minutes remaining in the event, Black and Fogg touched, taking them both out of the running. The damaged cars could not be cleared in the time remaining, so the race was checkered. The winner became Calvin Harris in the No. 42 Pro Drive Racing/Flat Out Racing SRF3 car.

“Early on, I was just trying to play it safe and not make any mistakes,” said 20-year-old Calvin after the race. “I knew there was going to be a lot of passing. I figured if I just kept my cool, we could get there in the end.

“I’ve been watching Spec Racer Ford my whole life,“ Calvin continued after receiving a big, congratulatory hug from his dad. “I’ve looked up to a lot of the guys I went up against today. To come out on top just means more than anything. When I came around and saw the checkered flag, I couldn’t control my emotions.”

On a side note, Calvin was not the youngest driver to win Saturday. That honor falls to 15-year-old Formula Continental® racer Nick Persing who brought home his No. 29 OPI Commercial Builders Inc Van Diemen RF00 a winner after a great battle with fellow competitor Rick Payne. And in another family affair, B-Spec racer Cherie Storms, in the No. 16 WCS Motorsports Mazda 2, managed to get the better of her father, WC Storms, who was driving a Ford Fiesta in the B-Spec race.

“I just raced my dad for the first time ever,” Cherie said with a huge grin after the race. “I didn’t expect to beat him, and this is actually my first win in SCCA. I will never forget this.”

The second race group of the day saw an amazing battle develop in the Touring 2 class. The No. 69 Chevrolet Corvette Z06 of Denis Novak started on pole. At the back of the field was T2 competitor Bill Collins in his Chevrolet Corvette. Why make mention of a driver starting at the rear of the field? Well, because Collins charged through the pack and chased Nowak down within a handful of laps. What developed was a fantastic battle for the lead, with both drivers taking turns at the front. But after the 25-minute race, Nowak edged out Collins by just .082-second at the finish line.

“I was surprised to see Bill after only the second lap, but there he was right behind me,” Nowak said. “He can out brake me, but I’ve got just a tiny bit more motor. It was a chess game. But I knew if I could drag him to the finish, I could get him. It was a lot of fun.”

Continuing the day’s excitement was Formula Atlantic® where John Purcell led Jay Horak for more than half the race. But with five laps to go, the two competitors, each driving a Star Pro Formula Mazda, ran into traffic. Horak, in the No. 37 AutoEnginuity car, got the edge and held on for the win.

“John got caught in traffic,” Horak explained. “It was a drag race down the back straight … and we were three wide, and all three of us are teammates. But I held the peddle in, I braked a lot less than I normally would, so it was a Hail Mary. That put me in the position to win.”

An equally exciting open-wheel race developed later in the Formula F (FF) class. Neil Shelton, in a Swift DB-1, was easily cream of the FF crop Saturday. He had a commanding lead right up until he pulled off track and into the pits. That handed the lead to the Piper DF05 of Mark Keller, who was being aggressively chased by the No. 38 R&A Manufacturing Swift R&A DB-1 of Larry Bangert. That battle came right down to the final lap with Bangert getting by Keller and holding on for victory by the slightest of margins.

“I knew Mark couldn’t beat me from turn nine to the finish line. So, I knew I had to be in front by then on the last lap,” Bangert said after the win. “We had a really tight battle through turn seven; we were side-by-side. I got by and held Mark off the back half of the lap. I’m glad to take the win.”

Once again, Saturday’s activities closed with volunteers, competitors, crews and families gathering for beverages and Mexican food at the All Participant Party. Sunday morning, PIR with be buzzing again as a second round of qualifying for each of the seven races groups begins at 9 a.m. local time. Follow all the action live at www.scca.com/live.