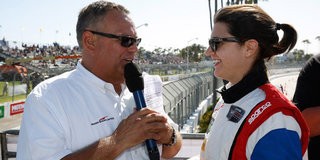 Each year, SCCA’s Chicago Region picks a motorsport celebrity to serve as Grand Marshal at the June Sprints. The past couple years have seen SCCA Hall of Fame inductees Bobby Rahal and Peter Cunningham fill that role. In 2019, the WeatherTech Chicago Region® June Sprints Grand Marshal is Greg Creamer who has served as the broadcast voice of the National Championship Runoffs® for several years, and is no stranger to Road America as he has been the PA announcer at the venue on more than one occasion.

“To be asked to be Grand Marshal was kind of mind blowing,” Creamer said.

Having lived in Elkhart Lake a handful of years, Creamer not only called many races at the 14-turn, 4-mile permanent road course, but also worn whites as a flagman at America’s National Park of Speed. When asked to estimate how many races he’s worked at Road America, Creamer has a hard time putting his finger on an exact number.

“Wow. It’s got to be over 50 because when I lived in Minnesota, I would work not just the Sprints, but regionals and nationals,” Creamer said. “Then there were times I would be at Road America and do announcing three or four times per year. It could be pushing 100 (total races).”

Creamer spent part of his childhood in Europe and first caught the racing bug after attending the German Grand Prix in back-to-back years in the late 1960s. His family eventually moved to northern Minnesota, where Greg first worked as a flagman and announcer at a motorcycle track co-owned by his uncle. Later, Creamer’s rise within motorsports started as a flagger in SCCA, and expanded to be a TV personality who started from the rank and file of SCCA’s membership.

“The day I joined SCCA changed my life,” Creamer states.

His motorsports history includes work as Trans-Am’s announcer, and he went on to forge a career with work on the radio and television broadcast sides with Speedvision Network and CBC in Canada. He’s also worked with IMSA.

Creamer will certainly enjoy some great racing June 14-16 at Road America during the WeatherTech Chicago Region® June Sprints, part of the 2019 Hoosier Racing Tire SCCA® Super Tour. You, too, can follow the action all weekend with live timing/scoring, static cameras and Super Tour Radio presented by Hoosier Racing Tire at www.scca.com/live.