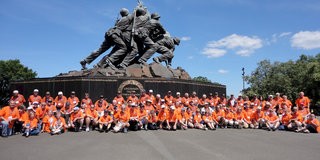 The Sports Car Club of America’s history and the United States Armed Forces are forever entwined. From the thousands of past and present members who served, to the support that General Curtis Lemay lent to the Club by opening up the country’s Air Force bases and runways to host road races in the 1950s.

So it’s only natural, then, that this weekend’s Hoosier Racing Tire SCCA® Super Tour at Watkins Glen International, hosted by the Finger Lakes Region, give back to those that have served and protected us.

This weekend’s race is working hand in hand with Honor Flight Rochester, both raising money and introducing veterans to the volunteer positions at an SCCA event. Honor Flight Rochester, the local hub of the national Honor Flight organization, is a not-for-profit organization crated solely to honor America’s Veterans for their sacrifices by giving veterans of World War II, Korea, Vietnam and the Cold War an all-expenses paid flight to Washington, D.C., for a group tour of the many memorials in the nation’s capital.

This weekend’s “worker fund” is being donated in its entirety to Honor Flight Rochester. In return (and for some fun!), 15 Honor Flight participants are volunteering their time in Tech, Timing and Scoring, and race administration for the weekend at Watkins Glen.

Honor Flight Rochester annually takes six trips to Washington – three in the spring and three in the fall. Each trip consists of 60 veterans and 60 “guardians” – often children or grandchildren who get a chance to see their loved one in a different light.

“When this opportunity came up, we said, ‘let’s do this,’” Jerry Butterbrodt, Honor Flight Rochester Events Coordinator and himself a 20-year-veteran, said. “(Race Chair) Elizabeth Thiel came by our tent at the Lilac Festival in Rochester, and we got to talking. The rest, as they say, is history. We’re glad to help. Especially all of us gearheads.”

As true heroes are wont to do, many Veterans have to be convinced to take their turn on the Honor Flight. Most feel that they didn’t do anything special, or that they are somehow unworthy of the trip – that others deserve it more. Of course, that couldn’t be further from the truth. That’s where past participants like Paul Wheeler come in, who can help bridge that gap.

“I went last year with my son, on Father’s Day – he was my Guardian,” Wheeler said. “It was a special day. One of the things that led me into that was, like so many other Vets, I was just a lowly peon in the Navy. I didn’t belong with this group. I wasn’t in combat; I was before Vietnam. I found out during that trip that there were cooks, mechanics, and some high-ranking folks as well. Everyone was important.”

A typical Honor Flight day begins with the guests of honor arriving at the airport at 6:15 a.m., where they board a Southwest Airlines flight to Baltimore. On board, each veteran receives letters written by local school children of all ages, often thanking them for their service and asking questions (which are very often answered in a return letter from the veterans). The plane lands in Baltimore to a throng of supporters, often four or five rows deep, to welcome them to DC. After tours of the memorials, the group gathers for dinner and an open mic to share stories and talents, before getting a good night’s sleep and flying back to Rochester to another crowd and welcome home celebration.

It’s a worthy cause. It’s important. And it’s one that the Finger Lakes Region is thrilled to be involved in. This weekend’s Hoosier Super Tour will support two veterans to take their trip to Washington.

If you can’t be trackside with the Honor Flight volunteers this weekend for the Hoosier Super Tour at Watkins Glen, follow along with live timing/scoring, video, Super Tour Radio presented by Hoosier Racing Tire and more at www.scca.com/live.