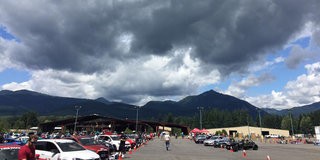 Each year autocrossers head to the Pacific Northwest for the back-to-back “Vacation-cross” weekends in Packwood, Washington. This past weekend the Hampton Mills Old Lumber Yard hosted the 2019 Tire Rack SCCA Packwood Championship Tour. Before the Tire Rack Packwood ProSolo®, here are some notes from the Champ Tour.

Street Touring Sport saw narrow margins and some leader changes as Christopher Vreeland led at the end of Saturday in his Honda CRX, just 0.203 second ahead of Eric Stoltz in a Mazda Miata. On Sunday morning Stoltz laid down a smoking fast first run, his best of the day, that Vreeland couldn’t catch. Stoltz took the class win by 0.155 second over Vreeland with Darrell Mcvey claiming the last step on the podium. Oliver Taylor, Jeremy Villalva and Garrett Cogburn claimed the fourth through sixth place trophies respectively in the 19-driver class.

In the 12-driver B Street class, the class lead went back and forth between the Chevrolet Corvette of Dan Bullis and the Porsche Cayman of Piotr Szarkowicz as both struggled to lay down clean runs. After Saturday, Szarkowicz led by a mere 0.008 second. On Sunday, the win was determined in third runs as Bullis cleaned up from his first two dirty runs, but Szarkowicz found two on his fastest, forcing him to stand on his first run of the day. Bullis took the class win by 0.643 second with Szarkowicz in second. Brian Hemming and Tom Kerns claimed the remaining trophies in third and fourth respectively.

On Friday, Zachary Morgan and Josh McCall ran into some fueling issues with their X Prepared Mitsubishi Evo and took it home to Portland to make repairs overnight. They were back on Saturday and put on a show swapping the lead back and forth all weekend. While Morgan led at the end of day one, McCall led the way on Sunday and took the win by 0.877 second over his co-driver. Scott McCusker claimed the third and final trophy in the eight-driver class.

The results sheet shows that Dallas Cutler dominated in Street Modified, but the story in grid was a busted boost tube on co-driver Doug Mikko’s second run that forced them to take a mechanical to fix it. Cutler returned unphased for his second run and regained the lead from his co-driver. On final runs, Nick Ruize was able to clean up a fast raw time to claim the second position. Mikko completed the podium in third and Tom Mill claimed the fourth and final trophy.

It was a close one in C Modified as the top four drivers were separated by less than half a second after Saturday with Eric Clements leading over Don Nimi. On Sunday, the two leaders walked away from the field. As they passed the lead back and forth, it came down to the last run. Both drivers improved, but Nimi had more and claimed the win by 0.026 second over Clements.

C Prepared brought the muscle and drama with two of the five cars in grid having critical issues. On Saturday, both the Pascaul/Hill Mustang and Maier/Stagnaro Mustang were flat-towed back to grid with drivetrain issues. Pascaul and Hill were able to track their issue to a catch can and return on Sunday. The Maier/Stagnaro Mustang’s valvetrain wasn’t going to be brought back to life overnight though. In a show of camaraderie, Hill offered their spare car and Maier and Stagnaro were able to take all of their runs on Sunday. Maier won the class by 0.204 second over Pascaul with Jason Braunberger and Tim Bodigheimer claiming the third and fourth place trophies respectively.

In E Street, the Teffts, Brian Sr. and Brian Jr. turned the back-to-back Packwood weekends into a vacation from Topeka, Kansas. Tefft Jr. took the class win over Jack and John Yeung in second and third respectively, both struggling with cones on their third runs. Allen Westenskow and Mark Hazboun claimed the fourth and fifth place trophies respectively.

The action returns to Packwood this weekend with the 2019 Tire Rack SCCA Packwood ProSolo. The Tire Rack SCCA Championship Tour continues next weekend in Peru, Indiana. Learn more about both events and the complete SCCA National Solo® season here.